According to an Associated Builders and Contractors (ABC) analysis of U.S. Census Bureau data released on May 1, national nonresidential construction spending declined 0.3% in March 2019. On a seasonally adjusted, annualized basis, nonresidential spending totaled $775.2 billion for the month, which represents a 4.8% increase compared to the same time last year.

Private nonresidential construction spending rose 0.5% in March and is up 2.1% on a year-over-year basis. Public nonresidential spending fell 1.3% but is up 9% for the year. Spending decreased in nine of the 16 subcategories, with religious (-4.4%), commercial (-2.5%), and amusement and recreation (-2.3%) reporting the most significant declines. Manufacturing (+2.5%) and lodging (+1.5%) topped the list in terms of monthly construction spending growth. 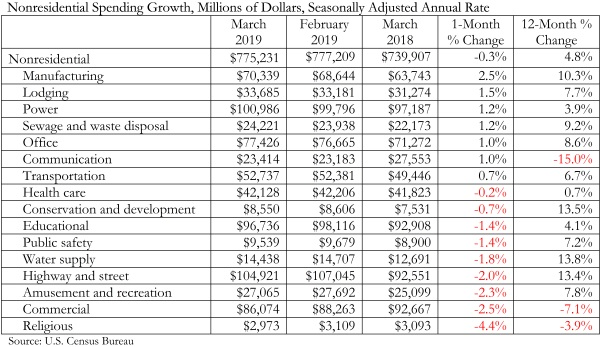 “Even though public nonresidential construction fell in March, there is little reason to believe this will continue,” said Basu. “State and local government finances continue to improve, positioning more communities to earmark additional resources to infrastructure outlays. In addition, there are signals coming from the federal government that it recognizes it must step up its role in order to be a catalyst for infrastructure replenishment. While it’s too soon to tell whether ongoing efforts will amount to anything significant given the absence of clearly identified funding sources, there is momentum behind the idea of increased infrastructure investment.”

“With the U.S. economic expansion remaining in place and contractors enjoying plentiful backlog on average, there is little reason to be concerned about softening demand for their services for the rest of year,” said Basu. “That said, widespread human capital shortfalls will persist, and will likely expand over the course of the year as contractors plan to increase staffing, according to ABC’s Construction Confidence Index. And while more communities are now focused on strengthening and expanding apprenticeship programs, it will take time for these efforts to yield substantial results. As a result, most contractors can expect a busy year and a continuous scramble to retain and attract talent.”